Samsung was hacked and 190G confidential data was leaked

According to reports, the hacker group Lapsus $ first released a screenshot of C / C + + instructions in Samsung software before releasing the leaked content, claiming it contained confidential source code from Samsung. 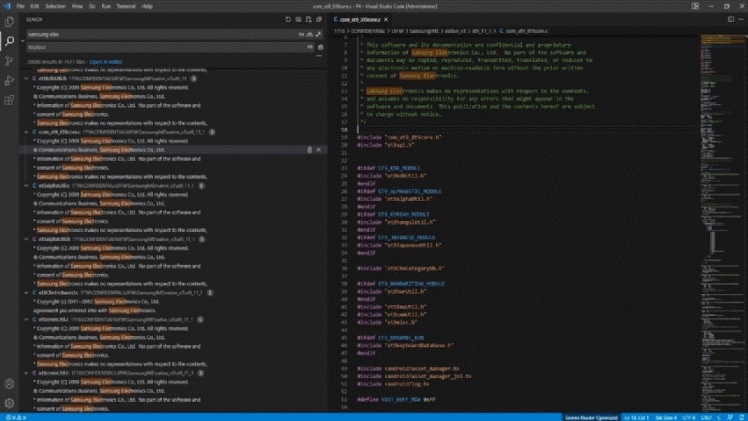 Furthermore, the hacker group Lapsus $ has divided the data into three compressed files, with a total file size of nearly 190GB, and has opened external download channels. The organization also stated that it would increase the number of servers deployed to improve download speeds. After the news broke, many in the industry expressed concern that if the information is correct, it indicates that Samsung has experienced a major data leak, which could cause significant damage to the company.

It is understood that obtaining the source code allows hackers to discover vulnerabilities in the device security system, exposing users to the risk of data theft.

According to the verge report, Samsung Electronics issued a statement on March 7 to confirm the data leak, but denied that it would affect customers’ or employees’ personal data.

According to Samsung, the company was recently informed of security vulnerabilities related to internal data. The security system was immediately strengthened after the incident was discovered. According to the preliminary analysis of the company, the disclosure includes some source code related to the operation of Galaxy devices but does not include any personal information of consumers or employees.

“At the moment, the company does not anticipate any impact on business or customers. It has taken precautions to avoid similar incidents in the future and will continue to provide services to customers.” According to Samsung.

According to reports, Lapsus $ is a highly confidential hacker organization. It previously attacked the Brazilian Ministry of Health’s network system and hacked the official websites of a newspaper and a TV channel owned by the impresa group, Portugal’s largest media conglomerate. The hacker organization did not mention the ransom issue in relation to Samsung’s data disclosure, nor did it say it would communicate with Samsung.

It is worth noting that the international chip giant NVIDIA was recently targeted by the hacker organization.

Lapsus $ publicly admitted at the end of February this year that it had carried out a cyber attack on NVIDIA and had approximately 1 TB of data from NVIDIA. The hardware folder alone is 250GB in size, and it contains information about “all recent NVIDIA GPUs,” among other things.

Denbeighhttps://kamagrabax.com
Previous articleWhy You Should Eat Fruits And Vegetables Daily
Next articleWhat are the Latest trends in Guest Blogging?

Tamilvids is not a well-known or established term and it seems like it's not a specific website or service. Therefore,223.7m 100m yoylundentechcrunch it's hard...

I apologize,secureworks orion therecord but as previously stated, I am not familiar with a specific website or service called Freshmaza, and it's not appropriate...